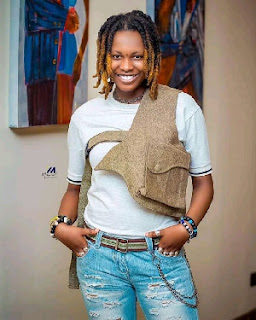 Budding Ghanaian singer,Barbara Naa Okeiley popularly called OV has revealed that there is the calling of God on her life and will one day quit music to preach the word of God.

The dancehall act who bears the name of her godfather Prophet Paul Okine a renowned Ghanaian man of God made startling revelation saying that she will become a prophetess at the age of 51.

According to the former MTN hitmaker, she has had a conversation with God about her transition from a dancehall singer to being a prophetess.

” If I turn 51, I’ll be a prophetess. Mark it on the wall.The process has started.” OV said to MzGee in an interview on 3FM’s Showbiz927.

Asked how she is certain of the revelation, she stated:
” I know. God speaks to me. Winning souls for God will be through music and healing people. That’s how I’ll get to pull people to God.”

” I won’t sing these type of songs during t' hat period. I won’t say I’ll change my. ways but this is my journey and I’ll get there. I’ll pass through all these channels and do dancehall and reggae before the transition so that at the end of the day, people will make reference to all that.”

She insisted that she may not divert into Gospel music as her focus will be to sing inspirational and worship songs.
News Updates