Akesse Brempong's "HOSANNA TO THE KING", A Great Song With Less Attention.....

on August 12, 2019
Akesse Brempongs HOSANNA TO THE KING, A Great Song With Less Attention, WHY IS IT SO? 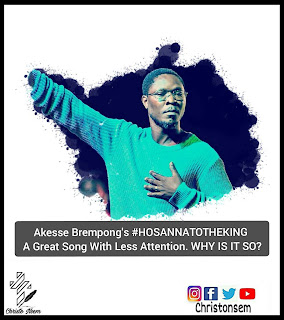 Regarded as one of the few Ghanaian reggae  musicians who are using their God given talent to preach the gospel of God, Akesse Brempong has over the years released some of the best reggae songs from the Ghanaian gospel music industry.

With "God Is Working" and "Crazy love", "Bongo Worship" being examples of his songs released before 2018, Akesse Brempong started 2018 with a 15 minutes and some seconds worship medley titled "Spontaneous Worship" which was recorded live at the 2017 edition of his annual "Apage Carnival " held in Kumasi. Akesse and his "Tribe Of Judah" then continued their releases for 2018 with another reggae song titled "No Weed".
Released on YouTube on 22nd May, 2018, No Weed, a song which was aimed at bringing awareness on the abuse of drugs especially 'tramadol' and marijuana received a lot of airplay on radio and also had a lot of people talking about the song that suggests that "the holy ghost high is better high" as compared to the other substances or intakes.

Releasing their last song for 2018, the 'Alright' singer,  Akesse Brempong and his team released a 5 minutes, 24 seconds song with the title "HOSANNA TO THE KING " a great song by all standards but has received less attention   since it's released on 22nd October, 2018.

With the song not being played or talked about frequently like other songs by Akesse Brempong, it is also not found on the track list of the gospel musician anytime he gets the opportunity to minister.

Now, with just over 28000 views on YouTube a well produced song like  "HOSANNA TO THE KING" of all Akesse Brempong's can be described as the one with the least of attention hence the question;
WHY IS IT SO?

*Is it that Akesse Brempong and his team do not believe in the quality of song they have.

* Or Akesse Brempong and his team did not follow the kind of promotion they did in order for the song to get the needed attention.

* Or Akesse Brempong and his team used this song to "test the waters " for future releases.

* Or the media does not have time for such songs from Akesse Brempong.

* Or Akesse Brempong did not meet the requirements of the media for the song to get the needed attention.

*Or there was no promotion at all for the song.

*Or there was no plan for the song at all.

*Or the frustrations of promoting songs in Ghana were to many to make the "Tribe Of Judah" team leave such a great song to be where it was in the first few months of its release.

Anyway, I think and believe the song can touch and impact more lives if attention is given to it.

Watch video of HOSANNA TO THE KING below;