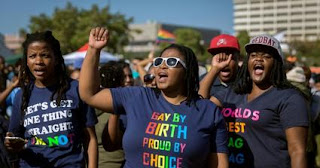 The Methodist Church of Ghana has rejected a
decision by its British counterpart to allow gay
marriage.

The Presiding Bishop, Most Rev. Dr Paul Boafo, at a press conference said the decision amounts to the reversal of the long standing Christian believes in marriage and normalization of behavior the church has rejected contrary to God's word.

"Some were even confused about the decision and this decision as I have mentioned, sought to go beyond recognition and acknowledgement to regularise same-sex, cohabitation, same-sex marriages and divorce within the church," he said of feeling of Africa Methodists.

“We were all saddened by the decision and there are good reasons for our feelings. This decision would amount to the reversal of the long- standing Christian believes in marriage and sexuality and the normalization of moral behaviour that the Christian church has historically rejected as contradictory to God’s word.”

According to him, the the Methodist Church Ghana is an autonomous conference with its own leadership.

“We have been independent of the British Methodist conference since 1961, however, historically, we have maintained the working relationship with the British Conference as the mother church that gave birth to the Methodist church Ghana,” he added.

The Methodist church in Britian set up a task group in 2016 to consider its definition of marriage in the light of legal and social changes.

A report from the group, according to the Guardian highlights “the hurt felt by those who perceive that the current definition implies they are ‘lesser persons’ ”. At the same time, it says, feelings of “alienation and distress” among those adhering to a traditional definition of marriage should be acknowledged.

It concludes that the church should “value all committed faithful loving relationships” and offer dignity and inclusion “to those who cohabit, are single, or are developing relationships, irrespective of sexuality and gender.”

It proposes “we take steps to enable same-sex couples to get married in the Methodist church”.
A clause would exempt ministers who felt prevented by their “personal beliefs and integrity” from officiating at same-sex weddings.