VIDEO: Yaw Sarpong To Feature Sarkodie On His Next Song 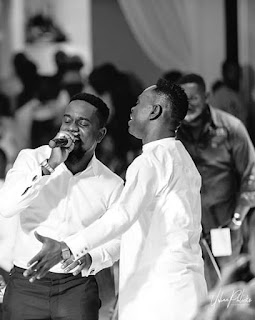 The “wo haw ne sen” hitmaker who together with his Asomafo Band have been in the Ghanaian music industry for the past four decades  disclosed to KMJ on Joy Prime during an interview that the track was due for release next month and will be on his next album titled "METHODIST".
CLICK HERE TO JOIN OUR WHATSAPP GROUP
In responding to the question of  the possibility of receiving backlash for featuring a “secular artist” wasn’t terrifying, the 'Oko Yi' said;

“we are all sinners living in this world, even Jesus came because of the unsaved. We are coming out with a song that preaches humility so people should watch out for an entirely different Sarkodie”.

The gospel minister in 2018 made his intentions to feature one of Ghana’s respected rappers, Sarkodie known during an with Graphic Showbiz so it comes as no surprise to hear that the track is done and will be released next month.